I am a third generation jewelry designer and have been creating jewelry for almost 20 years. I grew up around my grandparents’ rock shop Lou-Bon Gems & Rocks that was formerly located in Bailey’s Crossroads, VA and later in Warrenton, VA. I specialize in bead stringing and wire wrapping. I have a deep respect for authentic gemstones and crystals, as well as their healing properties, and use them as much as I can in my jewelry creations.

In 2004, I became the manager at Glassworks Gallery in Sperryville, VA and also started my glassblowing apprenticeship. In 2005, I met the love of my life and we got married. I had to put both my apprenticeship and my manager position on hold for a few years starting in early 2006 when we had our first daughter. 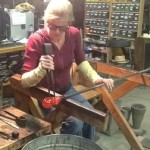 I enrolled at the local community college in 2006 and began taking classes part-time toward an Associates Degree in Network Engineering. While I was in school, I learned web site design and started creating web sites because I found that I really enjoy it.

In late 2007, we had our second daughter. With my husband’s love and support, I was able to stay at home with our two girls, and I continued to make jewelry to supplement our income (and blowing glass whenever I could- which wasn’t as often as I would have liked).

In Fall of 2013, my youngest daughter began kindergarten and I finally completed my degree. I realized then that I would be most happy pursuing my creative talents. I had the opportunity to go back to my job as the Manager for Glassworks Gallery in Sperryville, VA part-time, which allows me to be home when my girls get off of the bus. I have resumed my glassblowing apprenticeship and continue to create jewelry and web sites to follow my bliss and to nourish my soul.

I hope you enjoy my creations as much as I love creating them!